The So-Called Outside World

It’s not that I’m agoraphobic -- it’s just that I really, really like my apartment. But now and then I do go outside, and here’s some things that I’ve come across when I’ve been trying to get back home. 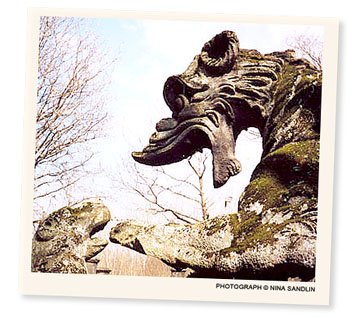 The Monster Park at Bomarzo

One of the unknown treasures of Italy is a bizarre private park built by a Renaissance nobleman. The Italians don’t approve of it. When I told a guy in Florence that I was spending a day in Bomarzo, he made a face and said, “Well, if that’s the sort of thing that interests you...”

The park sat derelict and unknown for several hundred years, and has only recently been restored. It’s between Rome and Florence; get off at the Attigliano-Bomarzo station. It isn’t in most of the standard guidebooks.

The most stolid and unyieldingly practical American city harbors some peculiar things.

One of the many reasons I loathe Ridley Scott is that “Hannibal” makes Florence look sickly blue. Well, it isn’t. It’s golden. It’s the most beautiful city in the world. It makes Paris look merely pretty. Go in the spring when you can get gelato millefolie.

Still, Paris. OK, yes, Paris. And it’s not just that everything is pretty. Where are the ugly people? I think the streets are swept each morning and the ugly people are put on a bus to Marseilles.

These are street scenes from the industrial cities of northern China. Chinese urban planners think “Blade Runner” was an okay blueprint for the future but just wasn’t intense enough.