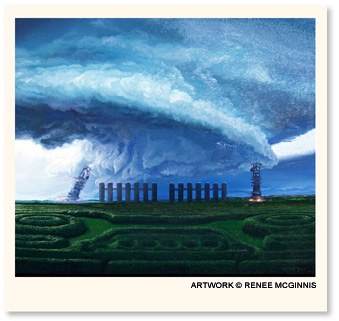 The Book of Storms

From a passage describing the Japanese monster movies I loved when I was a kid.

When I see these movies again today, it's obvious to me that they're allegories. They're about the nuclear age, the "new world of gods and monsters" that had burst into being in the 1950s and 1960s. That's why I found the older American movies so dull: they were about the first stirrings of the new world, the first dawning horror over the gods and monsters emerging into the light. In practice this meant, to my continual frustration, that you didn't see the monsters very often. They were kept offscreen for as long as possible, while their possible existence was solemnly debated. But in the Japanese movies, the monsters were the given. They were already loose and abroad in the world; they were already so familiar that everybody knew their names and personalities. (Official loudspeaker announcement to panicking crowds: "The controversial monster has been identified! It is Gamera!")

These were the only movies that described the world I lived in: one based on the effortless release of fantastic energies. The driving logic of the monster movie was insanely escalating overkill. The monster provoked wave after wave of wild attack from the military, each one more catastrophic than the last, ultimate weapon after ultimate weapon, and all of them completely ineffectual. But that didn't matter, because the escalation itself was the point. This was exactly the lesson I was learning from grown-up news on TV: it was all a vast shapeless surge of battles, riots, urban renewals, and space launches, and its only guiding principle appeared to be that the most logical response to any problem was total war.

Even the landscapes of these movies were familiar. The strange empty plains where the monsters collided, like immense trampled playing fields -- they were just like the blank, barely-occupied prairies I saw from the back seat of the family car, as we drove through the Illinois countryside. There were the same power pylons, the same scattering of glass and steel office parks, the same remote farmhouses, all waiting for the imprint of that vast and indifferent foot. Sometimes as we drove I liked to picture myself clinging to the back of the monster's neck, like a mouse riding a charging elephant, and seeing below me, as though through a haze of low-lying clouds, the trail of destruction he was leaving behind: parking lots cratered, glass towers stomped to flinders, reservoirs burst apart and draining, papier-mache hills trampled, the lines of white power pylons ripped into glittering streamers - an inexhaustible supply of fodder stretching out to the edge of the world.

I had a sense of where that landscape began. It was at the edge of my neighborhood. I didn't go there very often; it was too far for me to walk. But whenever I'd ride my bicycle out there, I'd feel like I was nearing a boundary line. The brownstone apartment blocks and sprawling white clapboard houses all dwindled away, until I found myself on a desolate commercial street with a row of old, shabby, sun-bleached storefronts - a dry cleaners, a laundromat, a real estate office, a couple of fast food shacks. They were irregularly spaced along the block, between weedy lots strewn with broken glass, like a tumbledown fence along a shoreline. On the far side were new ranch houses - row after row of them, each with a picture window and a garage that had three triangles on the doors, with a little grass plot and a sapling out front, stretching off as far as I could see.

I once ventured into that zone to visit my friend Joey. I bicycled down streets that curved as though drawn by a protractor, on sidewalks that were freshly-poured, dazzling white concrete, like the squares of a number line. But the further in I went, the more I started noticing something odd: the new subdivisions hadn't completely obliterated what had been there before. Along the highway, or hanging off on curliqued side streets, were odd relics from the days when this area had been zoned for commercial and light industrial use. There were stub-end train tracks imperfectly paved over with fresh asphalt, and weird buzzing electrical substations with rows of transformers like squadrons of rusted robots. But the most mysterious sight were the manufacturing plants: anonymous one-story modernist buildings, like schools or branch libraries, with glass-brick windows and raised letters beside the doors that said sinister things like DIE CASTINGS and TOOL & DIE.

Joey's house was on a side street along a drainage canal. The house was new and the interior was sleek and chilly. Every room, including the bathroom, had wall-to-wall shag carpeting. The furniture was angled and polished like a space station waiting lounge. There was a painting over the mantlepiece showing what looked like a beach on an alien planet, or a postapocalyptic desert with corroded mountains, where two remote gaunt silhouettes with extended filament-shadows faced each other down like duellists.

Joey himself seemed out of place in this setting. He had used to live next door to me, in a big, shadowy, creaky apartment building, and I'd always thought of him as a kind of poltergeist rousing up its somnolent corridors. He had always been the most exuberant and reckless kid in the neighborhood. He had taught me how to shoplift, to play hooky, and to ride a bicycle no-handed. He'd once gotten the whole gang to scream in terror by clambering along the high branch of an oak tree, hanging upside down by his knees, and jiggling until the branch emitted a loud crack. Then one summer he announced that he was leaving us; his family was moving to the west side of town and he'd be going to a different school. His loss was the closest thing to death that most of us had ever experienced.

I tried to pretend that nothing was different. But from the moment I arrived at his new house, I could tell that it wasn't going to work. It wasn't just that he was going to a different school, so he couldn't convulse me the way he used to do by imitating our teachers; he just didn't seem interested in showing off at all. He took me on a little tour of the back yard, which had a new swing set and a sandbox that he'd strewn with toy soldiers. He didn't invite me to play with the soldiers. He did make some vague effort at encouraging me to knock around a whiffleball. But plainly he wanted me to leave. It wasn't long before we were badgering and teasing and roughousing with each other like snappish dogs. Then I went too far; I called him a moron. It was the sort of thing he'd used to say to everybody constantly, in a kind of affectionate exasperation. But to my amazement his face swelled up into a weird jack-o-lantern: his cheeks got bright red, he kept working his lips silently, and then his eyes suddenly brimmed over with tears. He ran into his house and slammed the screen door.

I was left alone in the back yard. For a while I poked around idly, waiting to see if he'd come out again. I stared at the soldiers in the sandbox, frozen in an inscrutable skirmish, and wondered if I should intervene. But instead I left them alone to their struggle. Instead I went to stand at the chainlink fence at the back of the yard. There was a small culvert and at its base was the drainage canal, and on the far side was a row of manufacturing plants -- squat, low buildings with square chimneys and a tangle of crisscrossing power lines. Beyond them was nothing but the immensity of the western sky. The day was hot and the air was still. From inside the house I heard the muffled sound of an adult yelling and an interior door thudding shut. The traffic sighed on the main street at the end of the block. I pictured the traffic moving on, growing louder and faster, flowing onto wider highways, through land where the sidewalks disappeared and the buildings were all separated like islands in an empty sea.

The sky was so bright it made my eyes water. I decided to stare at it for as long as I could. It was a deep painterly blue dotted here and there with flowerets of cirrus. When I forced my gaze to stay fixed I saw swarm after swarm of black flecks teeming and sizzling in the depths. Gradually they seemed to grow larger and more persistent. They were shadows of translucent blue flitting and drifting and merging with each other, and melting away again like veils of rain. The longer I stared at them, the darker they became: ectoplasmic forms teeming and jostling each other like a gigantic herd about to stampede. I began to think that if I could somehow keep watching for long enough, I'd see Godzilla or Gamera congeal out of the air in front of me.

The wind was blowing harder. The fence was rattling; the swing set clanged; the screen door banged open; a precariously perched soldier in the sandbox fell halfway down a slope. The sky was black. The air was freezing cold. The first big splatters of rain were bursting on the concrete patio and making the air conditioner chime. And then something strange happened: a strong, sweet odor came falling over the yard as though from a great height. On the far side of the culvert was a soft-drink bottling plant, and the gust front of the storm was blowing before it the scent of grape soda.