Though for no other cause, yet for this: that posterity
may know we have not loosely through silence
permitted things to pass away as in a dream.
--Richard Hooker, Of the Laws of Ecclesiastical Polity (1594) 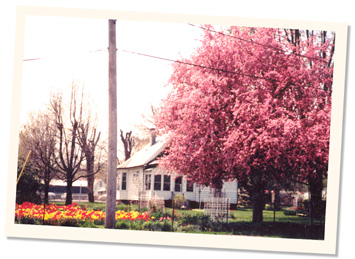 In downstate Illinois near the Mississippi River, there was an old house that belonged to my family. It was a small clapboard house built in the classic heartland style, with a big yard, lush gardens, and the inevitable white picket fence out front. It stood on the outskirts of Edwardsville, right where the last streets gave way to open countryside. It was a beautiful place. When you looked out from the porch on a summer's day, you had an unbroken view of meadows and fields and remote blue hills shimmering in the golden heat. You'd swear that nothing had ever happened there more dramatic than a passing thunderstorm.

The house played a big role in my family history. My great-grandfather built it at the turn of the last century; my grandfather grew up there, and it's where my mother spent her summers when she was a kid. By the time of my childhood it had been firmly established as a kind of private sleepaway camp for our family. As soon as school was let out for the year, our parents would take us from the Chicago suburbs to Edwardsville, where they'd leave us for weeks or sometimes months at a time. One of my cousins claims there was a year when her parents didn't come back for her until Christmas.

I can't remember how often I stayed there myself, or how long those stays lasted; they've all blurred together into a kind of eternal Tom Sawyer-ish reverie. Back then Edwardsville was a postcard-perfect midwestern town, a place of towering shade trees and well-tended hedges, placid side streets and meandering back alleys. It was an ideal setting for childhood adventures. It was where I graduated from a tricycle to a bicycle, and from softball to hardball; the first tree I ever climbed solo was a weeping willow by the picket fence, and I still remember finding a cicada shell stuck to a branch at its heart, like a statuette of martian jade.

But mainly what I remember about the house are its gardens. They were mazes of flower beds that filled up most of the enormous backyard; each year that I visited, they'd spread further around the side of the house and out toward the street. The few times I dared to venture alone into their interior, I was immediately lost in a disorienting riot of brilliant colors and intoxicating smells. There were endless beds of red and yellow tulips, bristling stands of zinnias and asters and snapdragons, towering skylines of gladioli and sunflowers, fog banks of Queen Anne's lace, and rose trellises as intricate as fireworks. And then there were the bumblebees. They floated down every path -- swarming in the long sunlit aisles, hovering and drifting and clustering and swerving from blossom to blossom like commuters in an aerial city. That was a heady sight for a suburban kid like me, who'd been taught to think of all insects as rare and threatening invaders.

But then there were always lessons at the house. It was really a boot camp in what are now called old-fashioned values. Our four hosts -- my great-aunts Hilda and Helen and my great-uncles Marty and Eugene -- made it plain to us that everything said and done and thought there was swathed in morality and custom. We learned the proper way to be deferential to our elders, the proper way of washing our hands before meals (the soap was scratchy and smelled of coconut), the proper way of saying prayers at bedtime (on your knees, out loud, hands folded on the bedspread, an adult auditor present). There was a proper way to say please and thank-you at the dinner table, and, more crucially, a proper time to say them -- the airspace above the table was as crowded as O'Hare, and a wrongly calculated grab at a bowl or pitcher or platter as it passed from hand to hand could cause a disastrous midair collision.

Edwardsville was the first place where I understood what manners were for. Back home they made no sense; they seemed to be nothing more than a bunch of meaningless gestures parents foisted on kids to test their obedience. But here they were unobtrusively essential. They allowed people who may not have even liked each other much to get along effortlessly in the closest quarters. They were a way for tradition, faith, courtesy, and habit to exchange places in a ceaseless dance.

At the heart of these lessons was Sunday morning at church. This was the most essential ritual, and it was the only one I never quite mastered. You had to be awake, scrubbed raw, crammed into your best clothes, and lined up on the front porch before the church bells started tolling. No matter how early I started, I was always late. By the time I reached the porch, with soap still sticky behind my ears and my shirt buttoned wrong, the whole neighborhood had already come streaming past -- girls in white blouses and billowy pastel skirts, boys in white shirts and long pants and strangle-knotted ties, men in ancient, spotless suits, and women in brilliant dresses emblazoned with storms of birds and flowers. Sometimes, when we were all hurrying down the now deserted street as though late for the Ark, the bells were already falling silent. Sometimes we were racing against a morning thunderstorm billowing up in the high summer heat, so that as we overtook the last stragglers, we found the steeple in dazzling white starkness against the black western sky, standing tall like a rebuke to the turbulence of the trees.

Inside, the air was suffocatingly sultry and the pews were hard. People sighed and rustled and coughed; they fanned themselves furiously and glared daggers at their neighbors as though blaming them for the heat. The minister stood at a plain pulpit of varnished blondwood before a big window of clear glass. He spoke softly but forcefully about the immanence of God in the world around us and the dire certainty of His approaching judgment. Sometimes the storm broke over the church as he spoke, and his words were drowned out by the wild drumming of rain on the glass -- but he never acknowledged the fury around him even by so much as raising his voice. Then the black clouds behind him would unravel, and the sunlight would come pouring through the window in furnace-hot shafts; and as my suit dissolved into scratchy ooze and the hymnals burned to the touch, I understood what it felt like to be caught in the crosshairs of God.

Our hosts were really the best possible exemplars of this way of life. The four were all around sixty when I first stayed with them, and to me that was as old as Methuselah. Their hair was white, their faces had tectonic wrinkles, and the touch of their skin was dinosaur leathery. But their laughter bubbled out of them in a ceaseless froth, as though welling up from a hidden spring. To this day, whenever I think of them, I remember that sound: Hilda's bright trill, Helen's wheezy, half-smothered chortle, Marty's haw-haw bray, and Eugene's rare, lone snort like a stone dropped in a well. It was a kind of laughter that radiated well-being, acceptance, faith. Just being around it made you exhilarated, even when you were the target.

And you could be certain you would be the target, sooner or later. The four of them were brutal about everything they didn't like, and the main thing they didn't like was the world outside Edwardsville. That included us: they thought we were citified, willful, too big for our britches, forever putting on airs. When I had to start wearing glasses, they spent that entire summer, with ever-replenished hilarity, calling me "Four-eyes." Once one of my cousins staged a play she'd written, with the rest of the kids as actors; and our hosts broke it up by standing in unison and booing and hissing and pelting us with wadded-up Kleenex, until the author ran off in tears.

In a way, that was their real lesson -- reticence. All their instruction in correct behavior, in modesty and practicality and self-reliance and respect, really came down to this: There is never a good time to talk about yourself. Your problems are nobody's business. Your triumphs are nothing special. Never boast, never complain, never reveal, never admit, never take pride, never expect a compliment, never look for sympathy or commiseration or approval. The only thing more offensive than asking a personal question is answering one; the most important goal in life is to keep your distance.

There were moments when they succeeded too well. It sometimes happened in the evenings, as we sat around the big dining table: everything would just stop. The deck of cards would lie unshuffled; the conversation would dry up; the laughter would die away, like a sweet breeze in the summer heat. Our four hosts would sit motionless, their heads bowed, staring fiercely at the floor. I learned better than to say anything then: any attempt to lighten the mood would be met with glares of hostility and incomprehension. There was absolutely nothing to be said; no thought was impersonal enough, no emotion that wouldn't be in bad taste. As the silence deepened I'd feel as though they were fossilizing before my eyes: those Germanic peasant foreheads, those round cheeks, those hatchet noses, those glinting, heavy-lidded, suspicious eyes -- they were like stone trolls in a forest glen.

That was when I was most acutely aware of how little I really understood about them. In all the years I'd been coming there, I'd never heard them say a word about their past. They never gossiped or reminisced; by the time of my last stay, when I was twelve, I still didn't know the first thing about their lives. Why were they all sharing the house? How exactly were they even related to each other -- were they all siblings, two married couples, what? And why, if they loved children so much, did none of them have children of their own? I didn't know, and nobody would explain it to me. It was as though they'd already slipped out of reach.

It was only during that last summer that I got up the nerve to pry. I approached Helen, the one I always thought of as the nicest of the four. I don't remember my exact question; it was something like "Have you all always lived here together?"

The effect on her was astonishing. She seemed to rear up and exhale flame, like a startled basilisk. "In my day," she gasped out, "people didn't talk about themselves." She eyed me with annihilating contempt. "And especially not to the children."