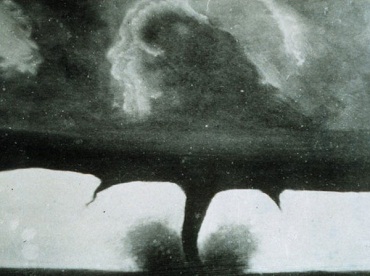 In those years, the main road through the American Colonies was known as the Kings Highway. Franklin spent a lot of time travelling on it during the early 1750s. He had three great projects he was engaged upon then  the same era when he was consumed by his research into the mystery of the landspout. He had founded a teaching academy in Philadelphia; hed accepted an appointment as assistant postmaster for the colonies; and hed become the quartermaster for an ambitious military expedition in to conquer and colonize the richly fertile land of the Ohio River Valley -- he believed that it was both inevitable and desirable that the colonists would ultimately take the entire forest from the Native Americans, and he thought it would take a major war to accomplish this. For all these schemes he needed money, he needed political support, and he needed influential contacts, and to find all these things he needed to be on the road.

That wasnt easy. The Kings Highway was an abysmal way of travelling. It wasnt named for the current King (George II) but for a much earlier one, Charles II, who had ordered the road built eighty years earlier. It still wasnt finished. The Highway threaded down through the colonies from New England to South Carolina, and everywhere it was erratic, fragmentary, and dangerous. It trailed off unpredictably in the depths of forests, or dead-ended within impassable valleys, or melted away on the outskirts of vast, gloomy, bird-haunted marshes. The journey from one colony to the next could take weeks. Despite Franklins best efforts as postmaster, it was often said that to be far quicker to get a letter from Paris to New York than it was to forward it on from New York to Massachussetts.

The Highway was a perfect example of what frustrated Franklin about the American Colonies. After more than a century, they were still nothing more than a rickety agglomeration of disperate settlements. Franklin envied the Native Americans of the Iroquois Federation, who had put aside their tribal differences and forged a military empire in the northern forests. It dismayed him that the colonists of a putatively superior civilization couldnt do what the primitive natives had succeeded at so brilliantly.

Did he know what he wanted to do about it? If he did, he was still keeping it to himself. From the outside, he appeared to be nothing more than a public-spirited rich man, who was making virtuous use of his leisure by involving himself with socially responsible projects. But the convivial round of his days  the meetings with prominent men, the stays at country houses, the charming horseplay, the indiscreet talk about politics after too much drinking  deliberately or not, these were the first forays he was making into the dangerous world of politics and practical diplomacy, and the first stirrings of the idea of independence from Great Britain  the grand venture that would occupy him for the rest of his life.

In the spring of 1754, Franklin was in Marylamd. He was visiting a friend named Tasker  in his letters he usually called him the excellent Colonel Tasker. Tasker was a gambler and a breeder of thoroughbred horses, which was not necessarily Franklins usual company -- but Tasker was also one of the most well-connected men in the state. The Taskers were considered the cream of the Maryland aristocracy.

Tasker invited Franklin and his son William to stay with him at Belair House, his great family estate in the hilly depths of the countryside. On their way, in the middle of a wide, richly flowing landscape of valleys and forested hills, one of the men in the party called a halt. He gestured for everyone to look down into a little vale that opened up to the side of their path. Below was a dusty road winding through the meadowlands. Moving along the road like a bustling traveller was a tight little commotion of air: a newly-forming whirlwind.

The whirlwind looked, Franklin later wrote, like a sugar-loaf  by which he meant it resembled a funnel (that was the shape that sugar-loaves were commonly spun into). The funnel swerved off the road and came sweeping up the hillside towards them. It swelled as it approached; by the time it crested the hill, Franklin guessed, it was around forty or fifty feet high, twenty or thirty feet across at its height, no bigger than a common barrel at its base. It moved past them at a walking pace, with an odd, irregular bob and swerve like a spinning top.

Everyone in the party reared back  except for Franklin. He later said that he just couldnt help himself. He had to urge his horse to a trot and he went tagging alongside the funnel to see what it would do. He thought of how sailors were supposed to have broken up waterspouts by firing cannons at them, so he tried lashing at the whirlwind with his whip  without any effect, he admitted.

Then the whirlwind turned again and meandered off into the trees. Franklin followed it. He lost sight of the road. The wind was getting louder; the countless rotted leaves of the forest floor were being sucked up into the funnel in a rushing whisper. All around the funnel, the treetops in the woodland interior were all bending and snapping in frantic circles. The progressive motion of the whirl was not so swift but that a man on foot might have kept pace with it, he later wrote, but the circular motion was amazingly rapid. By then, the funnel had turned into a swirling column that appeared to be made entirely out of dead leaves, which were soaring up out of sight in widening spirals. And it was still gathering strength. Franklin saw that it was now sucking up large dead boughs along with the leaves. That was when he wondered for the first time about his own safety.

By that point, Franklin guessed, hed followed the whirl into the forest for about three-quarters of a mile. His son William, who had been trailing along behind him the whole way, came up alongside. When William saw that Franklin was hanging back, he urged his own horse forward. The funnel was roaring in the depths of the woods; William boldly pursued it for another half mile. The chase ended when the funnel emerged into the open air of an old cultivated tobacco-field, and there unexpectedly melted away into nothingness.

Franklin and William, covered in sweat, their clothes spangled with countless leaves, made their bedraggled way back to the road. The air all around them was filled with a storm of leaves, billowing and drifting and soaring in the gusts. Franklin later noted that the leaves kept falling on them for miles afterwards. One of the company then turned to Colonel Tasker and asked if these kinds of whirlwinds were common in Maryland.

No, not at all common, Tasker said. We got this on purpose to treat Master Franklin.