The Mississippi When It Last Ran Wild 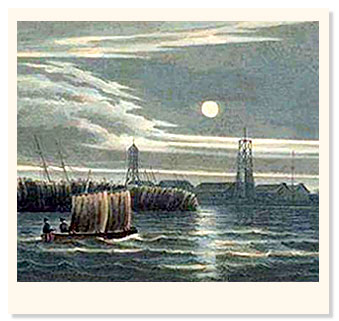 To the tourists, the passing landscape was pure monotony; the British travel writer Frances Trollope wrote that the Mississippi was dismal, wearisome, a huge and turbid river with a low and slimy shore, and complained that there was nothing to the scenery but forest  forest  forest. But a voyageur learned to see every stretch of the river as unique. He needed only one glance at the banks to tell where on the thousands of miles of its course he was. Some didnt even need to raise their eyes to the banks: they could tell their location from the color of the river surface alone. There were even some connoisseurs who boasted they could do it with their eyes closed, just from how the water tasted.

The river was sky-blue near its headwaters, in the white-pine forests of the far north. The pines came down to the banks and their roots tangled there in fantastic thorny profusion, and they gave the water a clean pungent tang of pine oil. A little to the south the water became a deep blue-green as the pines gave way to densely overgrown woodlands of oak and elm and maple. The banks grew more lush: in the marshes and along the sloughs and streams were waving fields of cattails and goosefoot and buttonbrush, and below the water surface in the shallows were mile-long beds of mussels. The marshes were crowded with countless squabbling crowds of wading birds. The river was busy with fish, with catfish and gar and bowfin and buffalo fish and bluegill and walleye; they were so abundant that people claimed there were places where you could cross the river by walking on their backs.

By the time the river reached the sandstone bluffs and prairies of Iowa and Illinois, it had become an olive green with hints of brown. Here and there were long wine-red stains trailing along the shallows; the color was from the tannin that had leached from ancient bogs. By that point the forests on either side had thinned out, and the land had opened up. The river ran for hundreds of miles through the long-grass prairie. The voyageurs would see nothing but the ruffled grass rising and falling in slow swells all the way out to the horizon. In the spring the prairie was a riot of gorgeous wildflowers, endless washes and shoals of white asters and black-eyed Susan and pink phlox and sky-blue spiderwort. In the summer the grasses were ten feet high and were swarmed by game animals like antelope and deer and bison; there were black ragged clouds of passenger pigeons so numerous that a single swarm could take days to pass overhead. In the autumn the grasses turned brittle, and were easily set ablaze; after a thunderstorm thered be a pall of smoke hanging over the horizon marking the spots where the lightning had started fires. Sometimes at night there was a brilliant line of flame edging down a distant hillside, below a titanic churn of smoke underlit by the glare. Now and then the fires swept down to the riverbank, and the voyageurs would be whisked unwillingly along an interminable billowing curtain of smoke and flame. They would be choking and coughing the whole way, and frantically checking the boat to make sure that the burning cinders and tufts of blown grass werent threatening to stampede their livestock or torch their cargo.

At the southern edge of the prairie was the confluence with the Missouri. The Missouri was a furious torrent bright red with the clays of the Great Plains. Its water was sour and gritty, too thick for soup but too thin to plow; its current was so strong that for miles south of the junction it flowed beside the Mississippi in the same bed without mingling, a swift narrow plume of reddish cream next to a wider swath of greeny murk. Gradually they churned together into an odd pale soup that looked like yellow ash stirred into dark oil. The forests closed in again on either bank. These were some of the densest and lushest woodlands in America. The marshes and canebrakes were tangles of starflower, bloodroot, jack-in-the-pulpit, wild ginger, and may apple; there were matted beds of maygrass, wild bean, sumac, arrowhead, knotweed, little barley, hickory, and goosefoot. The trees were scrub willow and cottonwood, pin oak and green ash, hackberry and persimmon, black willow and sycamore and honey locust and box elder and pawpaw. They towered up in countless pillars more than a hundred feet tall; the leaf canopy was a remote web of green and black almost up to the clouds.

Then the Ohio glided in from the east. It was wide and placid, and its blue water was so rich with topsoil that in some lights it looked black. Its taste was velvety; it was said that if you drank enough of it your sweat would be as sweet as dew. It, too, held aloof from the main current for many miles. But gradually it blended in, and the result was a rich, murky, chocolaty gold. This was the characteristic color that travelers came to associate with the river. It wasnt very appetizing to drink; the fastidious travelers in the lower valley made a habit of letting the water stand for at least a half an hour, to allow the grit and filth a chance to settle out. The hardcore river people didnt bother. Theyd just dump a bucket into the current and guzzle it down straight. They liked to claim the river silt was good for you. They called it the true Mississippi relish.

Meanwhile the forests were growing more tropical. Water oaks and water maples were interspersed with catalpas and wild cherries and tupelo gums; there were palmettos unfolding their green spearlike fans and vast stands of gloomy cypress. Along the waters edge were endless tessellations of Chinese lotus, and the marshlands were radiant with orchids and passion flowers and hibiscus. Beaver and otter splashed in the sloughs and creeks; the woods were haunted by wolves and panthers; and the air was a deafening riot of millions of songbirds.

The river unfolded into the delta, and the sloughs and bayous and marshes and swamps thickened all around it. The water became at times a pale luminous green that reminded some travelers of lime soda. Its taste was like bitter mildew. On either side the banks were marshy and gloomy. Water moccasins and alligators seethed through the mud; the deep green of the swamp forests was spangled with crossvine and trumpetvine, cinnamon fern and Cherokee rose, silverbell and blue lobelia, lilies and hyacinth and hydrangea and yellow jasmine. The river glided on past endless receding processions of cypress shrouded in Spanish moss; here and there were silent lagoons in perpetual gloom. The river meandered among orange groves and stands of magnolia so pungent the smell made some travelers sick.

Then the great swamp forests began to dwindle. The banks on either side melted away into indeterminate ooze that deepened and widened into borders of reeds and cattails more than a mile wide. The last solid land broke up into a maze of little peninsulas and islets and isthmuses dense with rustles of seagrass and sedge, swarmed by countless pelicans. The water shone from thousands of brackish ponds and lagoons and lakes. There was no firm line between the river delta and the salt estuaries. But in the end the last islets fell away, and the great freshwater flood of lime, gold, and brown went streaming serenely out into the blue salt of the Gulf.